I am a fan of reading magazines as opposed to books as I have explained in my Blog questioning the value system of 4-H clubs for children.

So now when I read something that gets me thinking and/or aggravated, my therapy is to write a blog. How lucky am I to have that avenue to vent. So now my quandary is an article I read in People Magazine’s August 2020 edition, page 57, titled, “The Horses Saved Me”. Well, you can see where this is going if you have read previous blogs and know that unfortunately I mostly see the glass half empty. The story goes like this: It’s about a woman who has gone through a traumatizing event in her younger years and now has PTSD. She now believes her survival throughout the years is due to the solace she found within horses. She even claims, that while she was riding her horses in the Hamptons on weekends and taking formal horseback riding lessons in Central Park, that “without my knowing it, they (horses) had been saving me my whole life”. She mentions the many horses that thankfully her parents could buy her by name, such as Guernsey when she was just 2 years old. Then there was her steed, Bravo, who “assisted” her in becoming a champion show jumper. With this horse she earned many ribbons and trophies and no doubt the admiration of her peers (other little rich girls). I am sure the self-esteem that developed from such accomplishments also helped her rebound from her past challenges. She explains how her skin bears bruises and scars of falls and bucks (hhmmm..why would a horse buck her off? Perhaps when it’s being made to do something it naturally wouldn’t do?) as a visual timeline of her relationship with horses throughout the years. She claims these wounds didn’t break her and led her to believe she is a resilient person and that she somehow through these injuries learned compassion. She also tries to explain that “a good horseman recognizes that it’s not a mount underneath them-it’s a soul”. Needless to say, this woman thinks she loves horses, so much so that she now serves on the board of directors of Gallop NYC, a charity that provides equines therapy (to people, not the horse). Which brings me to the question that I’d love to ask all people that claim, “they love horses”, and that is “what do you do for horses”?

I have had many friends throughout the years that have spent tons of money on their horses between their board, vet bills, tack, entrance fees to shows, etc., the cost is endless. It’s definitely a rich man’s hobby. Do these people know what happens to these horses when they sell them? Sure, they will think they have sold them to “a great home”, but what about when they don’t serve any more purpose? Too old and/or crippled to ride? Remember, they can live up to 30 years. Then what? I don’t think there are too many retirement homes for horses. So, did they really love horses, or the joy and enrichment that they got from them? I think in most cases it’s the latter, as in the person who had that heartwarming story in People Magazine. I guess because I see the glass half empty most of the time, I question what loving something really means. When I think of a person who really loves horses, I think of Kathy Bartley founder of Bear Valley Rescue in Alberta. Her mission is to save “useable” and healthy horses from slaughter. Tens of thousands of horses are routinely slaughtered in Canada for human consumption. Most of this meat is shipped overseas, some to the US (who has banned the slaughter, but not consumption), and of course some is eaten right here in Canada. But wait, what is even worse is that Canada allows the transportation of live horses in crammed conditions to Japan & Korea. Fact is the Cdn Horse Defence Coalition (CHDC) lost their lawsuit against the Cdn Food Inspection Agency in 2019, regarding them routinely certifying shipments of live draft horses even though it was not abiding by their own guidelines and contrary to the law. This means those poor horses were crammed into small crates, instead of being separated to avoid harming each other and not providing enough head room. Can you imagine the terror and misery these once noble animals went through, to then meet their fate in some slaughterhouse in these countries?

One can only imagine the challenge of bringing to justice an agency of the government to do their job correctly. Talk about a David vs Goliath scenario. So, if you truly “love” all equines and not just the ones you bet on or ride, think about supporting the CHDC by

Don Cherry’s Pet Rescue Foundation has donated to several groups that rescue the public’s used up equines that serve no more purpose to their owners. Read their stories at: 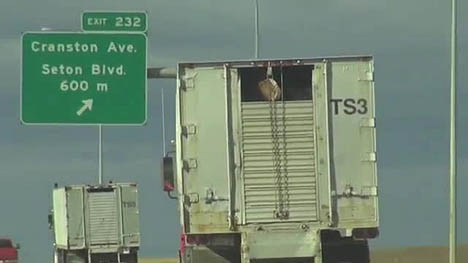 Horses on their way to Calgary Airport to be shipped for slaughter in Japan. Credit: https://defendhorsescanada.org/a-consolidated-review-of-the-live-draft-horse-shipments-from-canada-to-japan 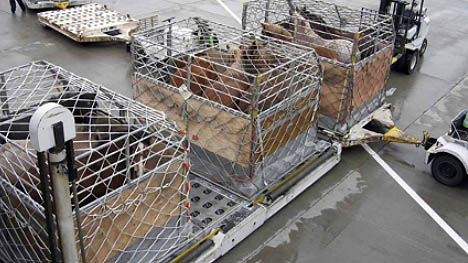 Crated horses at the Calgary Airport awaiting their flight to Japan for slaughter. 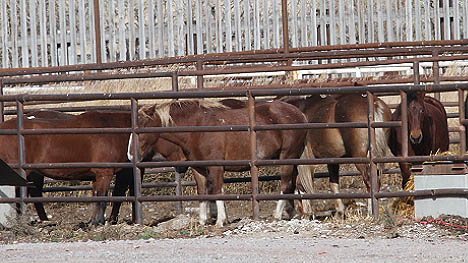 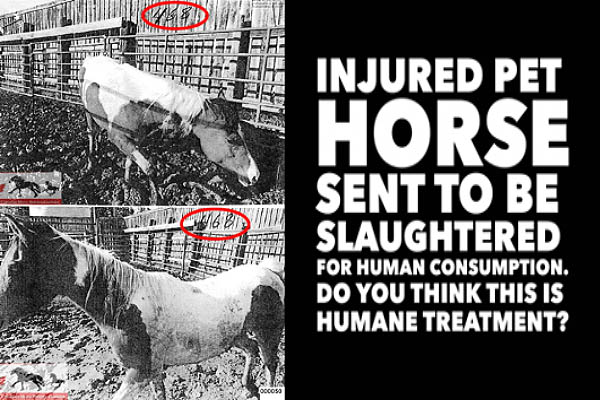 Click here>> if you think that these pampered horses once owned by someone who “loves horses” aren’t given up for human consumption. This is the story of a 7-year-old skewbald mare who was someone’s pet from 2014-2018 then betrayed in the worst way, but yet, not that uncommon. 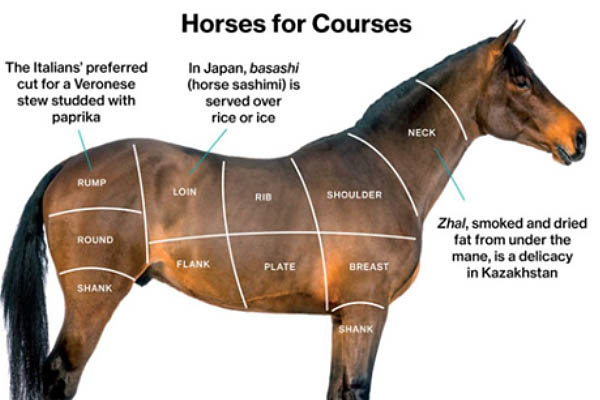 Caption: Just an FYI reality check & oh BTW for us Canucks, there could be horse meat in your pork sausages. To read how, just click here>>