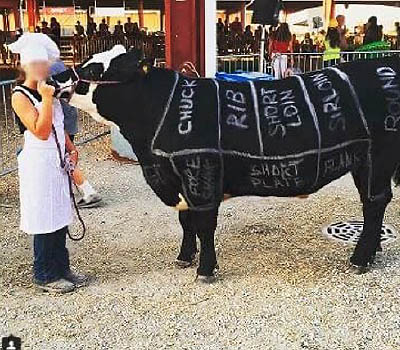 I am one of those people that when asked, “what was the last book you read?” I come back and ask, “do magazines count?” I have friends that have belonged to book clubs. I found these people thought they were “well read”, but in fact most book clubs read fictional books. Try to get them to engage in current events, or topics of interest, and they really didn’t have much to say. I find magazines much more, shall I use the word “enlightening”. I use this word because I don’t want you to think I believe everything I read especially the magazines I get. Lets face it, most media, whether it’s books, TV, whatever are left-wing. One of the many magazines I subscribe to is MacLean’s and no doubt about it is very left wing, especially their columnists. I often wonder if they really believe in what they write, or it’s what their publisher believes is safe to put in print.

Its hard not to read print, (yes I actually have the hard copy, and don’t read on a tablet, computer, or worse my phone) about the plague. However, MacLean’s August 2020 edition was exceptionally interesting. First there was the article on B.C’s Salmon Cannon on page 15. Basically it explained how Fisheries & Oceans Canada are assisting salmon to get to their spawning grounds after a landslide along the Fraser River created a waterfall that they couldn’t cross. Then on page 11 it told how foxes were making a comeback in certain areas in Toronto, and groups of volunteers had to protect them from the intrusive public. It was noted that they had to endure verbal abuse and threats of violence while they tried to explain to people not to feed them, give them wide berths, ask them to leash their dogs, and basically leave them alone so they didn’t get accustom to people. They actually had to shut down this protection program two weeks earlier then planned because of the threat of violence to the volunteers. What is our society coming to?

Which brings me to Page 18 on what I am really venting about in this blog. It’s a picture of this 10 year old Alberta girl (not pictured here) with her eyes closed hugging  her 4-H project, a steer named Turbo.  Seems she is upset that her pet project would not be able to be shown off and compete in a 4-H fair due to the Pandemic. It explains, that even though she realized all along this animal would be eventually sold and slaughtered, it “never took away her ability to connect with him.” In fact, she was quoted as saying, “Turbo, was (note:past tense) funny, silly, and sometimes a brat.” Hmm.. are these human traits that this child is putting on an animal?  It makes me cringe to think children could be so brainwashed and encouraged to keep such good care of an animal, and then have no qualms about selling it to the highest bidder and its life ends.  I don’t know about you, but I would want to encourage my child to have compassion, sensitivity and respect for a living creature, not about how much money it will make me in the end. Why would you want to desensitize your kid like this, perhaps to toughen them up to the cruel world out there? Why not have your kid not become a part of such an injust world?

So what became of this doe-eyed steer on page 18? This little girl got a disappointing $3.60 per pound for Turbo, (hey Maclean’s… your metric police missed this conversion in your magazine!). That’s a whopping $5184.00, not bad for a 10-year-old.  However, it was pointed out that she gave $250.00 to a local family in need of groceries (steaks, I take it), a fund for college, and $$ to build her own herd and clippers for next year’s project.

A loving hug to an animal she has raised from birth.  Scary how reality doesn’t bother these kids. The word “desensitized” comes to mind.

But I have a better use for her time, why not go to Camp Kindness offered at Ralphy’s Retreat Animal Sanctuary.  Were 7-12 year olds learn compassion, responsibility, respect and care for animals. To learn more about this Sanctuary for outcasted farm animals, click on the link below: 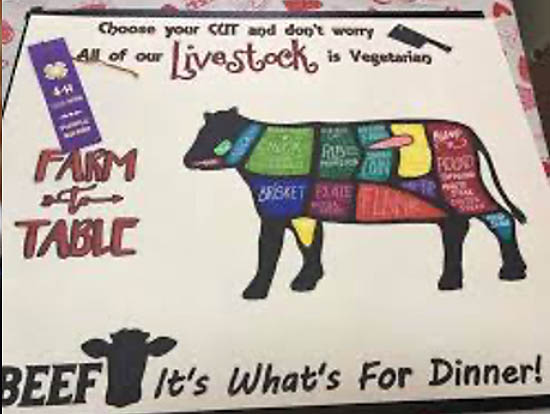 4-H Humor, I guess. Here are some facts that farmers may also find amusing: *36% of the world’s crops are used for animal feed. (75% of soybean crops are fed to livestock) *it takes 1 acre of land to produce 250 lbs. of beef. 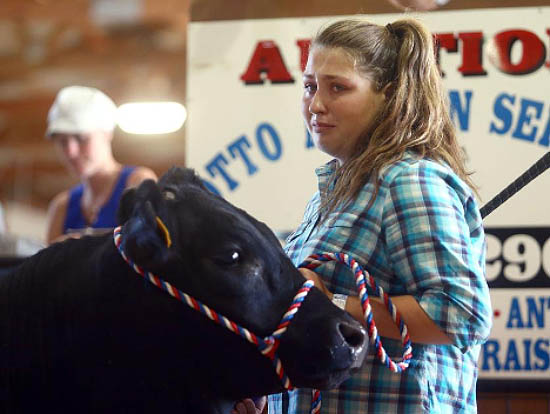 Now this girl might be realizing what fate her little farm project has.