Sammy came to a shelter in Ontario, on Jan 9th 2017 by an  animal control officer, after being found abandoned outside of a Tim Horton’s in -30 degree weather. Unfortunately no leads of ownership nor owners came forward for him. Sammy was a male intact Texas Blue Nose PitBull approximately  2 years old weighing 80lbs. Though a sweet and loving boy, on Jan. 19th, the pound  completed a SAFER (safety assessment for evaluating re-homing)  test on him. 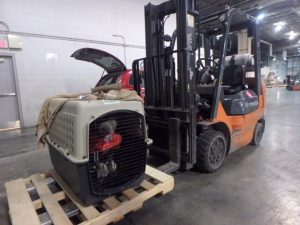 On his way out East and being a co-operating good boy. A far cry from an Ontario Tim Horton’s. 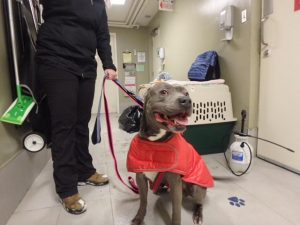 Getting a new coat for his trip to Nova Scotia

He did great, however there was one section of the test (Tag) that he will require training for. When Tag was first started during his assessment he joined in to play along with the assessor, in the midst of playing tag Sammy got over stimulated and started to jump, growl and mouth the assessor’s hand. Once tag was stopped it took him approx. 2 mins to calm down and he was right back to wagging his tail. During the other sections of the SAFER (Look, Sensitivity, Squeeze, Toy and introducing him to another dog) he did amazing, for the toy section he had no interest in any of it. It was as if he has never seen a toy before. He always had a loose body with his tail wagging and a smile on his face. Sammy also has a lot of built up energy so it is very hard to get him to sit still for very long. To keep Sammy’s mind busy and his high energy at ease he will require a lot of mental and physical stimulation and exercise.

He is not destructive in his run and he seems to be pretty clean, which indicates he may be easily crate trained. When putting him back into his run he can be a little reluctant and pulls back on the leash.  You can see how these dogs are put to the test before there is any possibility of moving forward in investing money in them to be moved out of province.  For their chances of adoption in Ontario are very limited due to the BSL laws.  For Cindy’s view on Breed Specific Legislation Laws click here. It was determined he should be allowed a chance to find a loving home, and it is then that his caretakers decided to reach out to this Foundation to pay for his flight out to the Maritimes. The Nova Scotia SPCA in Dartmouth was willing to take him in, neuter him, and find a home for him.

So it was with much pleasure that this Foundation could play an intricate part of Sammy finding a home that such a sweet boy deserves.