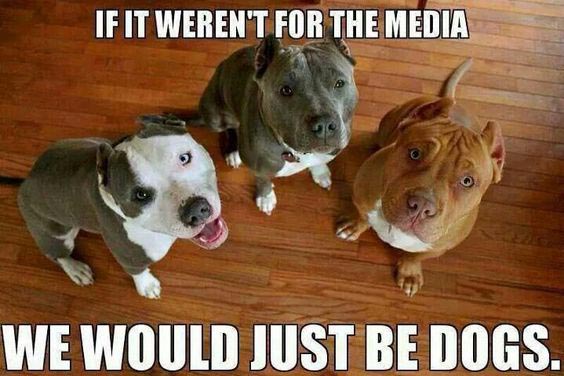 Being President of Don Cherry’s Pet Rescue Foundation, you knew I, Cindy Cherry would have to address Breed Specific Legislation (BSL).  So much has been written and analyzed on this subject. There are lots of great organizations that you can go to that will give you the facts. Click here for one we have given a grant to . So, in this article I will give you my take on the injustices of BSL.  I think many of these laws are politically motivated.  Usually they are spear headed by a person who has a political agenda.  Let’s face it; an anti-child mauling platform makes great fodder for speeches.  So let’s see, if you disagree with them, you come across as an unfeeling individual.  They feed the public’s misconceptions, fears, and falsehoods. Such as Michael Bryant did in 2005, who as Ontario’s Attorney General pushed for and got his Provincial wide ban on anything that had a wide jaw and looked powerful.  He capitalized on so many gullible people believing in his anti-PitBull campaign.  He even referenced my family in regard to his breed specific legislation by saying, “ the Bull Terrier is not captured.  It is not a PitBull….so Don Cherry’s dog is safe, which means I, (Michael Bryant) am too.”  Fact is at that time we owned an American Staffordshire Terrier and Staffordshire Bull Terrier, both purebreds that were soon to be banned.  As for this breed of dog called a PitBull,  that he kept addressing, as all dog people know  is just  a slang term, for anything that looks like the numerous purebred Bully Breeds that are out there.

Let’s face it folks, in a society that prides itself in being politically correct, which means we do not believing in stereotypes, this is the ultimate and perfect example of misinformation at its best. I have to laugh when people use PitBull as a euphemism for strong, diligence, and good at what they do. “I have a Pit-bull of a lawyer, for my upcoming divorce case”.  How often do we here that one?  The reversal of such bans could be a complicated process.  I am sure if such bans get revoked, the first person to get bit by a dog with a wide jaw, will make the headlines in the paper, and look to see who is accountable.  So now we have the question who should be accountable for dog bites, the dog or the owner?  This Foundation has been accused of not taking a more firm stand on “repealing” BSL laws.  I think “modifying” such injustices, has a better chance of moving forward, not rescinding the whole thing. Responsible dog ownership is the answer, not banning specific breeds and mixes thereof.

So please educate yourself and friends about this misconception.  Help out charities that are dedicated to saving these dogs.  I used this unfairness of these killings, as a learning tool to my son while he was growing up.  It taught him how truly unfair life can be, plus what the word gullibility means.  Is this teaching him to be a cynic, which I was told I was doing? I don’t think so. It is a life lesson to be learned that a lot people have agendas out there, plus don’t believe everything you read and are told.  You can apply that to  just about everything, not just about the ban on “PitBulls”, whatever they are!