“All Canadians can be proud of the work done by the Story Book Farm Primate Sanctuary which rescues and cares for primates. Primates are our closest animal relatives. They deserve our help. Please go to www.storybookmonkeys.org and see what you can do.

Click here to view her 2015 appeal when the sanctuary was looking to save its home. 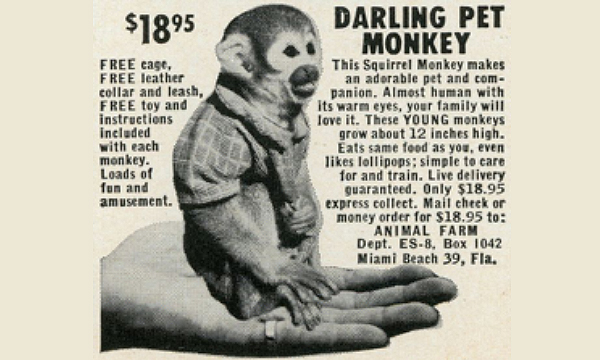 If you’re over 50, I am sure you remember these ads.

When I, Cindy Cherry, President of this Foundation received  a request for a grant in assisting in undoing what people do to monkeys, I thought back when I was a little girl.  I would always see these advertisements in the back of magazines, with a cute little Squirrel Money sitting in the palm of someone’s hand for sale for only $19.00. I begged my mother to let me have one, after all, I had my babysitting money.  I dreamt about how much fun it would be to have a pet monkey.  I know it was a pie in the sky dream, but oh, how I wanted it for a pet.  How cool would I be?

I look back and wonder, was this a legitimate advertisement?  Did they really sell these monkeys?  I hope it was a scam, and not reality that they really sold these poor creatures for twenty bucks. So, I googled it, and yes, between 1968-1972 there were 173,000 squirrel monkeys imported to the US from South America.  But, back to reality:

Established in 2000, Story Book Farm Primate Sanctuary is an entirely volunteer-run organization that operates solely through donations. As the only monkey sanctuary in Canada, their mission is to provide a safe home and an enriching long-term environment for non-human primates. They come to them from a variety of unfortunate scenarios – for example following their use in laboratories, exploitative industries (e.g. the film industry, roadside zoos, etc.), or surrendered/rescued from illegal and/or inhumane private ownership.

First and foremost, their purpose is to provide daily, long-term care to their residents – year round. They also lobby for change in governmental regulation surrounding exotic animal ownership and the fate of primates serving in research facilities. As part of their public education mandate, they also facilitate seminars in schools and with the public. Throughout the years, they have been at the forefront of trying to improve the state of captive care for primates in Canada.

As an example of the work they do, read about Pugsley, Cody and Cedric’s story:

In 2015, they received a phone call from a representative at a research facility in Canada. They were asked about the possibility of retiring two young and relatively healthy crab-eating macaques at this sanctuary; their projects were wrapping up and usually, if you didn’t die during the study and you could not be useful in another study, you would be euthanized. Never yet (even in Canada) had a monkey used in research ever been released if they made it through the study and had a potential life ahead of them.

It took three full years from the date of the first phone call to save these monkeys. When they went to visit the two monkeys – Pugsley and Cody – they were also asked to take a third, Cedric. “They’re best friends”, they said, “You have to take him, too.” In a precedent-setting arrangement, research monkeys were being given the chance to retire for the first time, should they be able to find appropriate, healthy, and long-term accommodations.

And so, in 2018, for the first time in Canadian legal history, three research monkeys were retired and transferred to live out their lives elsewhere. For the first time, these boys are living with other monkeys full time, they have an outdoor as well as an indoor space (they had never seen the sky or felt grass before), and get to choose how they’d like to spend their day. They aren’t forced to do anything they don’t want to do and they have no duties.

Their journey was a massive and arduous undertaking for this organization’s volunteers to take on. The first hurdle was to approach the body that governs over lab-monkeys. In Canada, the Canadian Food Inspection Agency (CFIA) has jurisdiction over non-human primates used in research facilities. So Story Book Farm Sanctuary called them on the telephone and asked them how they would feel about doing something they had never done before – letting three young monkeys go. This conversation took the better part of three years. After just over one thousand days, they had a resounding yes from all corners of the court and collaboration became a shared goal. The problem was that the law, as defined by the CFIA, states that any monkeys that are imported for research purposes can never be designated as anything else. They either die as a result of the research or become ill from the research. If they are still healthy after completion of the research, they are usually subjected to other research within the same facility or are sold to other facilities to be part of a new project – or they are euthanized. This is the first time that the CFIA had allowed healthy research monkeys to be handed over to a sanctuary for their retirement. Their designation remains the same, they are still technically owned by the lab, but they are allowed to live out their lives at this Sanctuary.

So one afternoon in May of 2018, a truck came up thier long farm driveway and it was carrying three big metal cages. Their boys had arrived.

There are several parts of that day that various participants said was the most poignant – that they stayed outside that night longer than any of the other residents, that they were so taken that things that moved in the sky (e.g. birds and clouds), or that they couldn’t stop picking grass blades – but the moment that everyone agreed may have been the most breathtaking was the way they leaped with certainty from their metal cages into their new home. As if they knew it couldn’t be much worse than where they’d been, they embraced it.

It took 3 years and 20 days to bring Cody, Pugsley, and Cedric to their retirement home. Story Book Farm Sanctuary hopes now that they have worked successfully with the CFIA and this particular research facility (which they legally cannot disclose), there will be other facilities that will feel comfortable starting the conversation to retire their monkeys. According to various statistics, there are approximately 7,500 monkeys in research facilities at any one time in Canada. There is so much more work to be done, but is it any wonder that this Foundation was more than happy to donate to one of the best kept secrets in Sunderland,  Ontario.

Think about sponsoring one of the many Lemurs, Squirrel, Spider, Capuchin Monkeys, Baboons, or Macaques at: https://www.storybookmonkeys.org/monkeys.htm

Remember folks, we also rely on donations from the public to distribute funds to quality groups like this. So please consider letting us to the ground work in distributing funds to worthwhile causes and click here: https://www.doncherryspetrescue.org/donate/