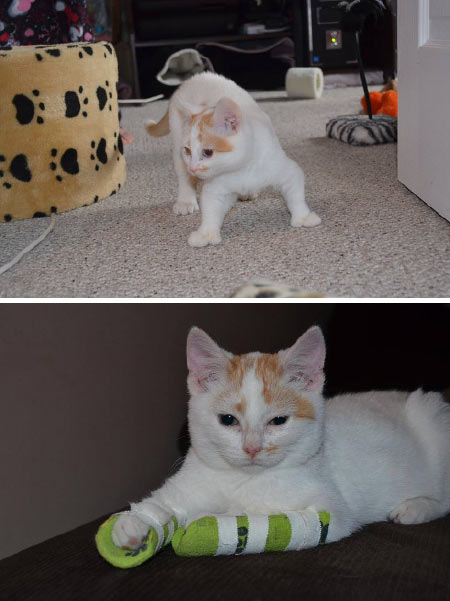 Thanks to this all-volunteer group, Norton got splints to straighten out his deformed front legs.

I, Cindy Cherry, Miss City Slicker, got my first dose of what feral cats were when I visited a farm in New Brunswick in 1991.  I was in the kitchen of this old farmhouse owned by this elderly woman who lived by herself.  She was yelling at her company to bring out an old pot of stew to the barn for the cats to eat.  I, to myself said, my isn’t that nice she worries about the welfare of these cats.  For I had heard how disposable cats lives were on a farm.  So we had a nice visit, with me saying what a beautiful part of the country this was and the usual banter of when you meet new people. I should have realized I was out of my element.  Well just before we left, she starts saying, “oh before you leave you can’t forget to drown all those kittens that were overrunning the barn, for the damn cats were useless when it came to killing the mice”. Needless to say I was horrified. I tried explaining to her that if she didn’t feed the cats, they might start doing their intended jobs which were to kill and/or eat mice.  She would hear none of my logic, so of course I wouldn’t let it rest.  I then got the word from the person I came with (my new husband), that why would I argue with a 90 year old lady and upset her? Turns out this little old lady was his Grandmother.   I shook my head in disgust and we left.  Welcome to the family.

I tell this story for I can see there are more groups popping up that realize that the Feral Cat population is in crisis mode.  It’s not just farm cats, it’s a problem everywhere.  It’s this crisis that Healing Animal Scars Society steps in.  Their mission is to reduce the suffering of community cats. TNR, Trap-Neuter-Return, is the only humane way of controlling the cat overpopulation (not drowning them).  While everyone would like to see every cat in a loving safe indoor home, not all feral cats make suitable candidates for adoption. By spaying and neutering, you improve the lives of feral cats because once “fixed” they are less likely to fight and spread diseases such as Feline Leukemia and FIV, or chase each other into moving traffic, plus they will no longer be mating and they become better community members. This means the howling associated with mating will decrease and the cats will continue to hunt rodents.

What bugs me even more than the feral cat problem is the people that let their “pets” roam the neighborhood. To “those people” the world is one big litter box.  I once knew of a couple who were going to Greece for 2 weeks.  When I asked them who would be  taking care of their cat, they informed me they would just leave it out, for it could fend for itself quite well outside.  This is the same couple that once told me how upset they were that their cat killed a beautiful Cardinal. Knowing how disgusted I was with her, by the look on my face, she proceeded to tell me how she punished the cat by keeping it indoors for one whole week.  I then asked her, so you expected this cat to then figure out it was OK to kill the little brown birds (sparrows), but not the pretty red ones that her and the hubby enjoyed listening to in the mornings.  She looked at me as if I were nuts.  My contempt is exhausting to me.  A Study by Environment Canada scientist Peter Blancher, estimates that cats kill between 100-350 million birds per year in Canada.  38% of those by pet cats and the rest by Ferals.  (Are you reading this Tess?). But oh, hear these types boo hoo when their cat doesn’t come home at night.   I just don’t get it. 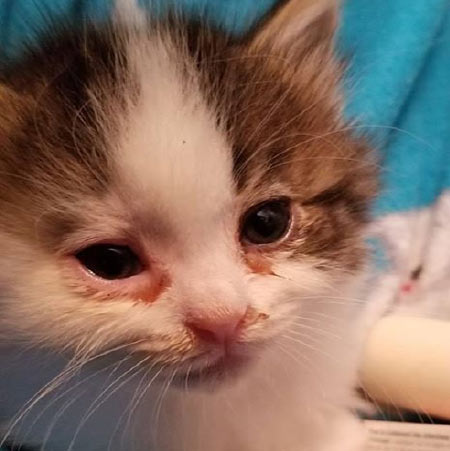 The look of many a barn cat. 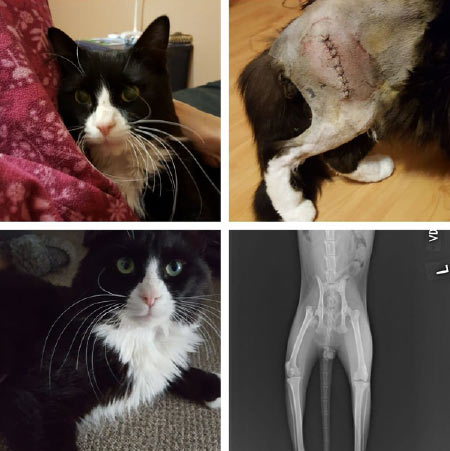 Jingles got major orthopedic surgery to save his leg.