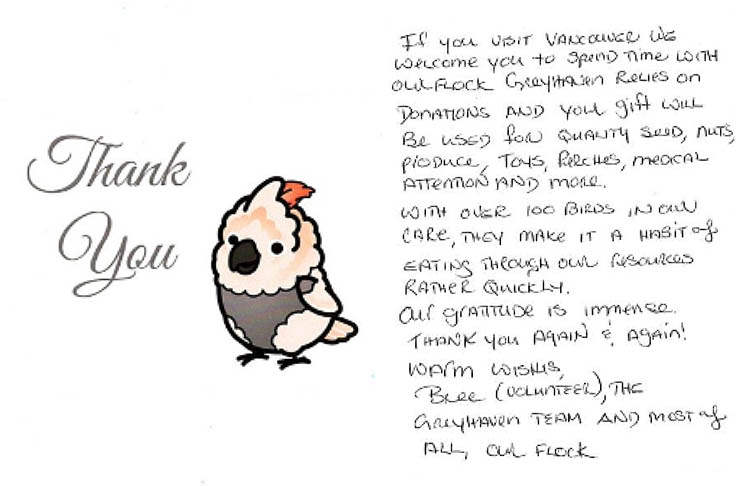 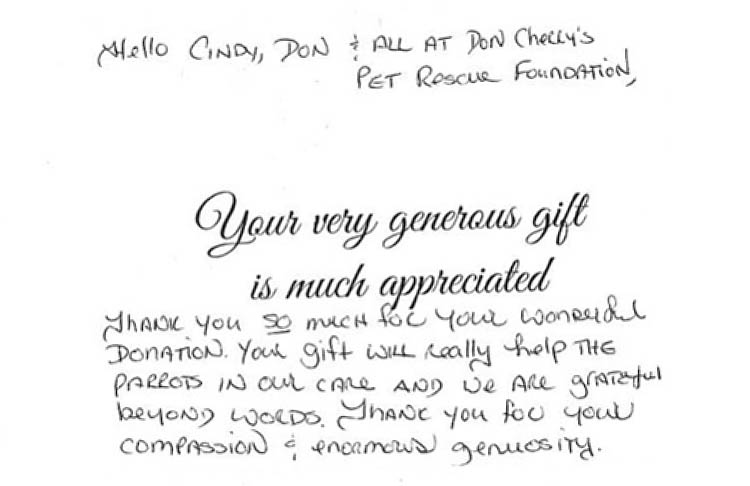 Always nice to get a hand written thank you card.

The sad facts about parrots is that the majority of them go through a minimum of 7 homes in their 80+ year life span. To their own detriment they have the intelligence of a 3-year-old child, they are messy, loud, and destructive. Because of this it takes a special type of person to understand their needs to be a successful guardian. Why there are still pet stores and “breeders” selling and producing more birds, when there are literally thousands in rescue across Canada and the U.S., is beyond logic. But wait, lets think about this, what is the main factor in breeding most animals? Why money of course. Have you ever seen how much these birds go for? Let alone what is sold to maintain them.

But I, Cindy Cherry the author of this article and President of this Foundation, has her own guilty reason for granting money to an organization that saves parrots. Years ago, I worked in a pet store in Kingston, Ontario. That, yes, we had one Moluccan Cockatoo for sale forever. It was a big draw for this pet store, people would come in to see it all the time. I was in charge of cleaning its cage and giving it food and water and that is it. In all the time I worked there I did not see it move. I never even saw it eat or drink. It was there for years so obviously it ate at night. Being in my carefree twenties I never saw the injustice of all this. I just saw it as something I had to clean up after. Yeah, I admit it and that is were the guilt comes in. I look back and feel so very very bad for this poor intelligent creature. How could I be so unfeeling? Thank goodness after 3 years a kind man came in and said, I am here to buy that bird. No haggling of price, just came put down his Chargex card, & put the bird in a dog carrier and left. I soon found out he had several birds and rehabilitated it as much as he could to give it a better life. Thank goodness the owner of the store never got anymore parrots to sell. He now knew better, for he also had an Amazon Grey Parrot that he took home because it wasn’t happy. This poor thing plucked itself bald from stress. My boss did his best to make the bird comfortable. It was quite tame, and very rarely in its cage, and could it talk. It also was a great imitator; it would constantly whistle for the dogs which fell for it every time and would imitate his wife yelling at him. It seemed to be happy, but never did stop plucking. So very sad.

Thank you Greyhaven in all you do, such as executing Canada’s largest animal rescue effort in 2016 by saving 584 parrots from deplorable conditions at the World Parrot Refuge in Coombs, B.C. These birds were living in dark, dirty, rat-infested enclosures, with many being ill, underweight, mutilated or injured due to fighting and self-harm. This rescue was done entirely by a small and very dedicated group of volunteers.

So, when Greyhaven applied for a grant, I was so happy. Finally, I could ease my conscious just a tiny bit about being so uncaring in my early twenties.

Inside the Parrott Refuge facility were Greyhaven rescued over 500 birds, including these 3.

Bird smugglers get quite ingenious on how to get birds into countries that have people who will buy them. 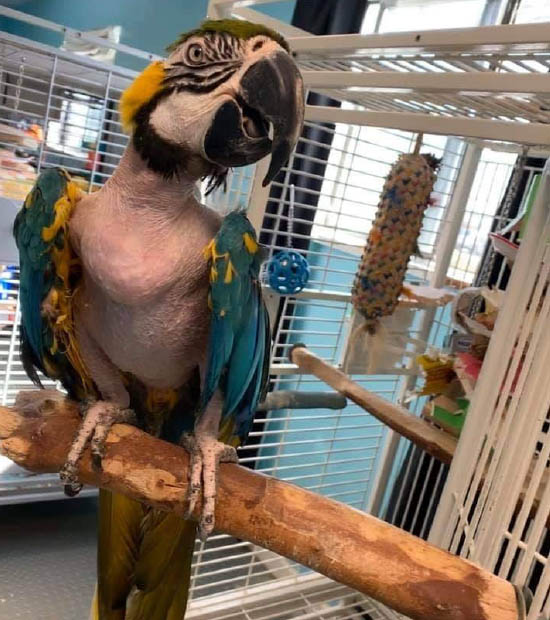 This is what happens to a “plucker” , usually a sign of one unhappy bird. 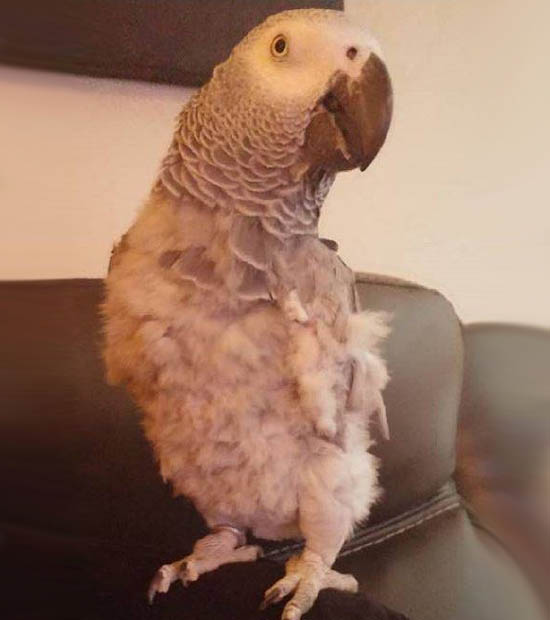 An African Parrot that plucks itself.