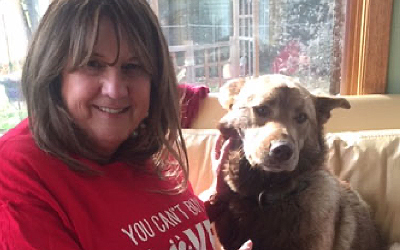 My first meeting with Poppy 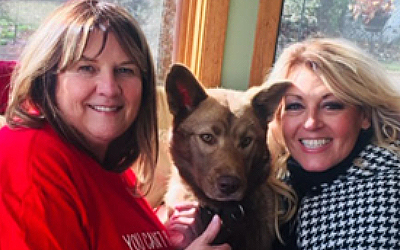 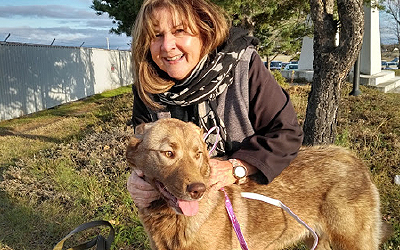 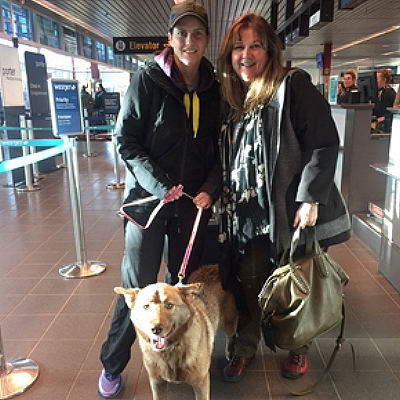 Erin of Northern Reach Rescue Network, who got Poppy ready and to the airport.  Poppy looks like she knows something is up. Little does she know. 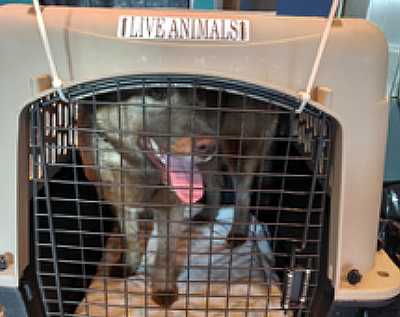 Toronto, here she comes. Remember….think about being a Flight Volunteer.  It’s a bargain  to ship dogs to their new homes.

Meet Hazel. Her name used to be Poppy, but when I saw those beautiful Hazel eyes, I knew she had to have a new name to go with her new life she was now going to experience. Her saga, as with most “Rescued” dogs has many people involved. I, Cindy Cherry, will tell you the role I played in her life. It all started when I realized that I wanted to walk the walk and participate in a spay and neuter clinic in Northern Ontario. I heard about the crisis up North involving the overpopulation of dogs, feral and not. Especially in the First Nation’s communities. For more on my adventure on the Lake Helen Reserve, please, click here.

Since I was flying to Thunder Bay, I wanted to make sure I did not come back to Toronto empty handed. This means being a “flight volunteer” as I had done before with a Pitbull when flying out West. For more on that story, click here.

With this desire of bringing back a Northern Dog to Toronto to find a home, I contacted Northern Reach. They had a Reserve Dog in foster care, that was prime for finding a loving home, her name at the time was Poppy. Her foster Mom, Tammy, had several Rescue Dogs, so I had to go over to her home and meet Poppy. I knew when I laid eyes on her she was special. There are some dogs that I come upon that just have that soulful look of intelligence and manners.

Something they are born with and unable to teach. Hazel was one of these dogs. A bit stand offish, but who could blame her? She had to come back to Toronto with me. But then what? So I told Hazel’s story to my friend Denise who runs Mattie’s Place. She said she would have no problem getting Hazel in foster care and go from there. Little did I know, what “from there” meant. Hazel showed up in her flight cage to the airport via a Northern Reach volunteer, Erin.

My good friend Niki, past President and Founder of Northern Spay &amp; Neuter Program who drove me to the airport had a nice time walking Poppy outside of the airport, giving her some exercise before the flight. When I arrived in Toronto, both Denise and Hazel’s new foster Mom, Lori, where there to greet us. Poppy, was no worse for wear, and seemed quite relaxed in her still clean kennel. So we all got in the truck and off we went to Mississauga.

There, we let Hazel out of her kennel in Lori’s back yard. She was of course a bit shy, but did not seem overly anxious or frightened. We even let Lori’s 3 other rescue dogs get aquatinted, and basically Hazel just put up with them and they soon lost interest in her. I then gave Hazel a pat on the head and wished her luck. I told everyone involved to send any expenses they had in being involved with Hazel to me, and this Foundation would pay them all.

I truly believed I would never see her again, for they already had people interested in adopting her. Then I got the news. Hazel had puppies. This is what happens up North. First time heat and she gets pregnant. She didn’t look pregnant when I saw her, but sure enough she had 8 huge puppies for her size. Well, I had to go see her. I then got an opportunity to see the inside of this absolute saint of a person who took Hazel in.

This house was full of love and rescued “pets”. First was this “pond” in the middle of their family room filled with rescued Koi from a restaurant aquarium where they were left to die in 6 inches of filthy water. It also had several turtles that people leave at her house, for these rescuers always get a reputation in the neighborhood. Then there was a huge birdcage filled with about 10 Love Birds, all caught outside in the neighborhood. I too, have caught several budgies outside that hang around bird feeders. The whelping box they made for Hazel was huge and was made for comfort.

They said she was a wonderful mother. Very attentive, yet also needed her own time and didn’t mind you handling her pups. At the time of this article being written, the pups still haven’t been weaned. Hopefully Mattie’s Place will have no problem getting them all homes. As for Hazel, well who knows? We may just have a “Foster Failure” on our hands. If so, she is one lucky dog. 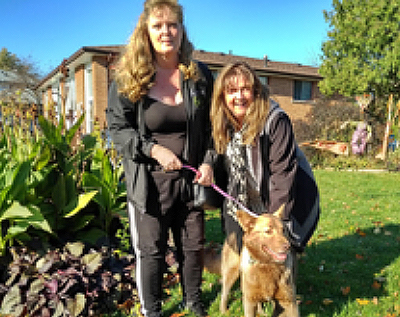 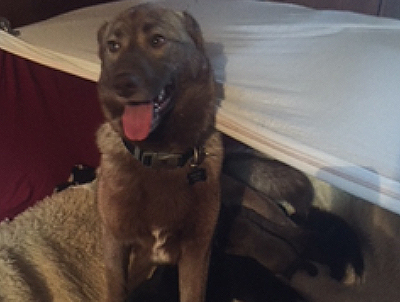 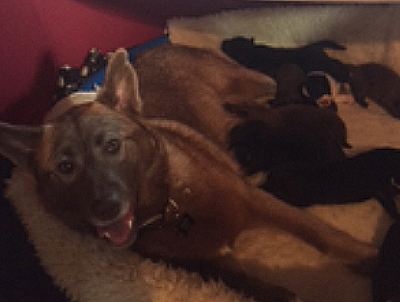 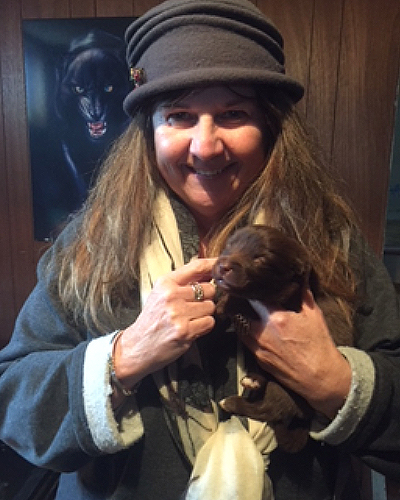 Pup that has her Mom’s coloring 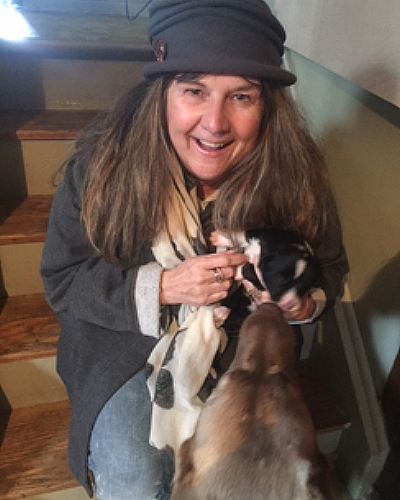 Daddy must have been some sort of Border Collie 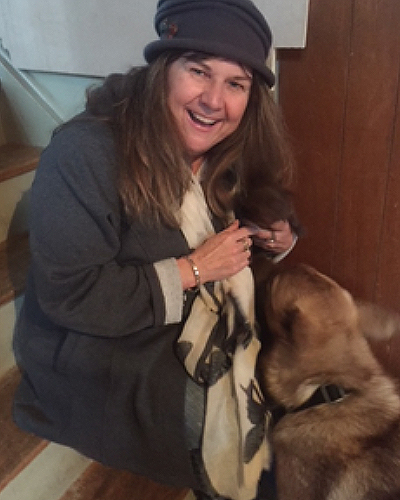 It’s pretty remarkable how Poppy lets me handle her pups.

View me “being a jerk” 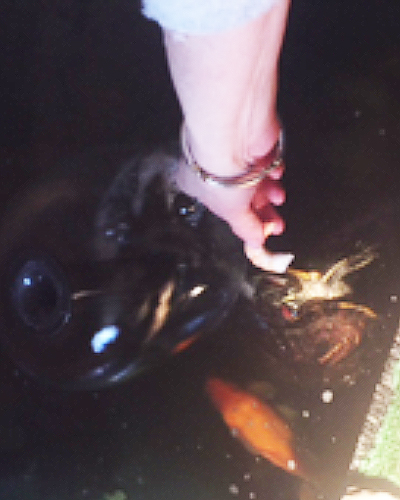 Me feeding the turtles shrimp. 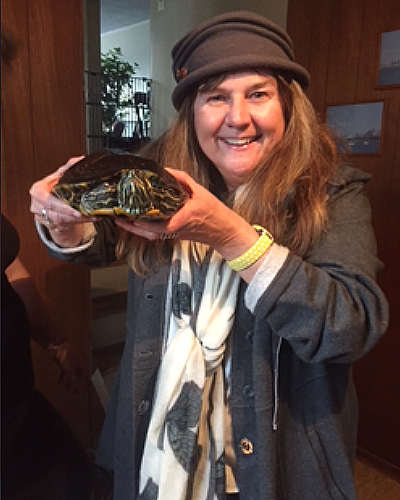 This is the type of turtle that they used to sell in the 5 & Dime Stores. Still do sell these turtles, and once again, they keep growing, then they get too big, and are soon disposed of, such as this one. Thank goodness for people like Lori.