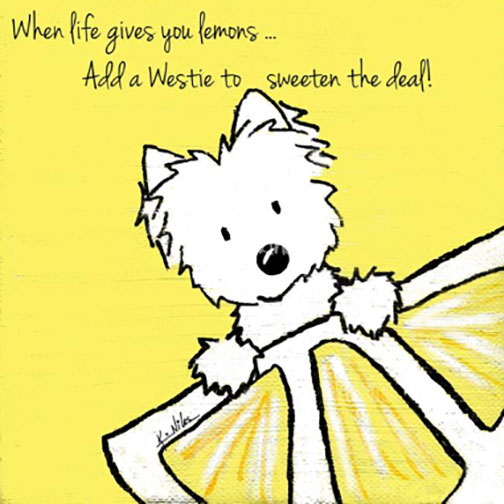 Such a happy go lucky breed.

I had a summer job at a huge Veterinary/Kennel Facility in Massachusetts. When you are the lowest person on the totem pole (that may not be PC, if not, please forgive me), I did everything.  I assisted the vets, cleaned the boarding  (400 capacity) &  infirmary cages/kennels, plus gave all the boarders their daily heart worm medication and any other meds.  So I learned and saw a lot. One day in came this Westie that was as wide as she was long in terrible shape.  We put her in the tub, and discovered she was infested with maggots.  Basically she was being eaten up alive.  I don’t know what they do now for this, but we doused her with ether.  There was so many, that they clogged the drain.  Yep, and it was me who had to clean out that drain with my hands.  Believe it or not, this was the least of her problems.  Something else was going on inside her. X-rays indicated, as expected, there were 6 huge puppies in her.  She was in labor, and these pups were going nowhere.  It was all hands on deck, when she had a caesarian right there and then. We each got a huge black and white pup, to swing up and down to get the fluid out of its lungs.  Who knew what she had been bred with.  So there she stayed in the infirmary for weeks, me being the main person who took care of her.  She was such a good mom.  Nursing these pups when she was sliced from stem to stern. The day that I was dreading came soon enough.

Her bill was up to $3500.00.  The vets had doubts the idiot owners would even want her and her brood back.  Plus they could only have her back if they paid cash up front.  I cherished her so very much.   I told Dad & Mom, I’d pay the vet bill and I wanted her.  Thinking back it was awful position to put them in.  We had Blue, and she certainly wouldn’t take kindly to these new intrusions in her territory.  Once again, Dad spoke his wisdom, and talked me through it all.   “Now, Cindy, would you admit that even though these people are jerks and stupid, that if they pay the bill, that they love that dog? And now they have a vested interest in taking care of her, because of all the money they have invested in her?”  I had to admit it, but yes, I saw his point.  If they didn’t however, I was taking her home and they agreed.  Low and behold I couldn’t believe it, they paid cash, and away she went.  I was heartbroken.  I still think about that dog to this day.  She sure was special.