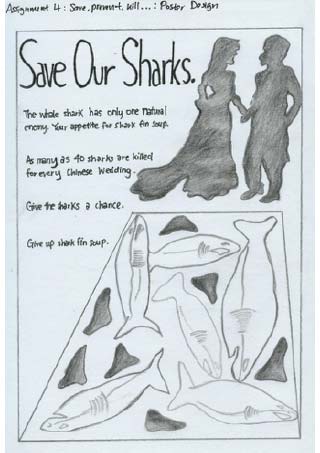 A school project poster.  This is the only hope in teaching the new generation to question “traditions”. 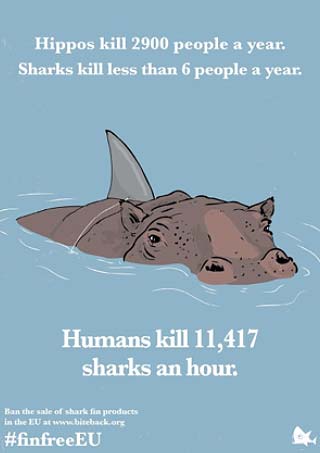 Unless you’ve been living under a rock and don’t know what shark finning is, I will give you my take on the “act of slicing off  fins from live sharks,  and more than likely, discarding  them back to the ocean, still alive, to die a slow agonizing death”. (Want more basic facts and the state of this practice in Canada? Click here:

So…. what should we do about such a barbaric practice?  Make laws banning it?  This might make it a bit more difficult, but you know darn well it will still go on and why?  Because I feel it is a “cultural” thing and with cultures, comes traditions.

Try stepping on those multicultural toes. Make all the laws you want. The prediction of what people will do is best determined through them questioning their own morality. How far will they go to participate in an immoral act to retain their traditions?

When I say morality, I mean the state of people’s minds in determining what is right and what is wrong.  Does morality ever trump tradition? Well lets hope so. Plus I believe tradition evolves, into modern day political correctness.  For instance, take in consideration of what we did as a family by my parents taking us to the circus, and watching dancing elephants and tigers jumping through fire hoops.  It was the norm; no one thought anything about it. This tradition is now politically incorrect.  Gee, now that I think of it, maybe political correctness does have its moments.

Perhaps, that makes me “cherry picking”, my PCness, I could see someone accusing me of that.  (look out FaceBook trolls).  I witnessed this clash of morality vs tradition after asking a Chinese soon- to- be bride, (after she bored me to tears about her up and coming  wedding),  if she was going to serve shark-fin soup at her reception. You could see her cringe, which meant yes.  She explained her grandmother expected it to be a “traditional” wedding.  Which translated into, grandma is paying for the wedding, and the Golden Rule applies, “the person with the gold rules”.

As sad as this is, I am sure this bride knew it was morally wrong to do so. Perhaps someday, if she ever has a little girl, that they both will know better than to serve tasteless, expensive shark-fin soup at her daughter’s reception.   Ohh…maybe it won’t be an issue, cause by then no sharks will be available for consumption.

EPILOGUE: For a 2018 update on the laws in Canada concerning shark finning, click here: