So I was going to get horse experience working at a race track, cause I wanted to pursue being an Animal Veterinarian Technician.   My only connection was to work as a hot walker for Gerry Cheevers’ trainer, Mr. L., at Rockingham Raceway.  If any of you ever watched the movie The Sting, with Robert Redford and Paul Newman, they mention this famous raceway.  First day I was all excited.  I had to be at the barns for 5 am, so of course I am early.  I have no idea where I am going, but who drives past me after I parked my car, but Gerry.  He spots me, and says get in I’ll take you to the barns and introduce you to everyone.  The groom of his two top horses takes me under his wing.  He explains the job of a hot walker.  Cool the horses down that come from working out with three walks around the barn, and then let them have only 3 gulps of water out of their bucket.  Sounds easy enough.  I get the lead and wind it around my hand so I have a good grip.  Wrong.  He asks me, “So if this horse bolts, your hand and strength is going to stop it?”  Good point, I then fold it, and place it my palm.  One of the many lessons to learn.  He then has me bandage a leg with a poultice.  I want to make sure it covers the whole front part and bam; he lifts his front leg and nails me right in my eye. I could feel it swelling up and throbbing. This groom had the 2 top horses in the barn.  One was Royal Ski. It was an honor that they even trusted me to walk him. Read about him here: https://www.si.com/vault/1976/12/06/621703/royal-ski-wasnt-caught-napping ). 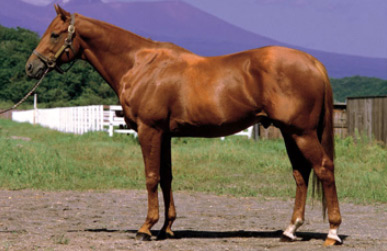 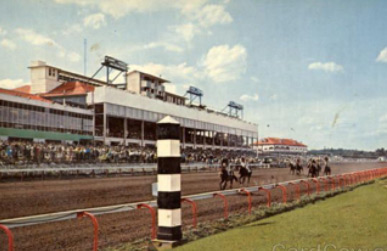 To me he was not only the fastest, but the smartest.  He would not take a drink unless he did his 3 turns, plus only take 3 gulps.  The rest of the horses would always want a drink as they past their bucket, plus they’d down the whole thing, which would bloat them when they are still hot.  Not Ski. I tested him all the time.  I ask the groom if he had trained him that way he said no, he is just that smart , and is why he wins.  So I ask, does he win cause he’s smart or just fast? It was explained to me that usually horses are either or, but Ski had both, that’s why he was a cut above the rest of the horses and I saw that.  Now the other top horse was Timothy’s Chance, but not as smart as Ski.  This fact cost Dad and a lot of other people a lot of money.  In his last two races he came in 3rd , then 2nd.  I knew what they were doing.  He could have easily won, but they were holding him back to get the odds up.  So finally the big day comes.  They are going to let him go full throttle.  I was all excited and said to the groom, “today’s is Tim’s big day”.  The groom shook his head, and said, “He won’t win, he is used to not winning, he doesn’t know he is supposed to pass the others”.  That night, when I finally got home, Mom and Dad were getting ready to go to that race.  Dad even said, “well tonight’s the night Gerry’s been waiting for, I guess one of his horses is going to win big”.  I piped up, and said, “No, he is going to lose, I know it, the groom told me, he doesn’t know how to win”.  Of course Mom pipes in, “that’s it we’re not betting”.  Dad says he has to or Gerry will know something is up.  He also asks me if I like Mr. L., Gerry’s trainer.  Of course I did, so he tells me to keep my mouth shut and don’t tell anyone what I told him, if I want Mr. L to keep his job.  As my Mom is walking out the door, she says, “by the way how did you get a black eye at a race track”?  Maybe she thought I was in a fight; wouldn’t that have made my Dad’s day.

So the end of this story is everyone lost a lot of money, and the next day Timothy’s Chance’s stall was empty.   It was then I learned that this racehorse business is just that.  It’s a business.  It’s not about loving horses; it’s the fun and excitement it brings to people. To bring this type of entertainment to people takes a lot of money, jobs, and most of all, horses lives.  Especially horses that lose, through no fault of their own.

EPILOGUE: I always wondered what happened to Royal Ski, so with most things you “wonder”, I googled it and this is what I found.

For more information check the link below: :
https://www.bloodhorse.com/horse-racing/articles/175822/japanese-stallion-royal-ski-dead