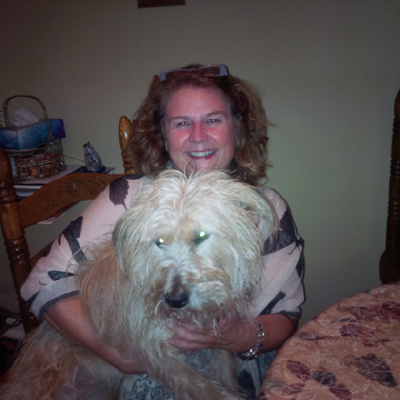 But to put a face on what kind of dog is destine for the dinner table, pictured here is me and Daisy. Saved from the meat trade and adopted by my friend Carla.

Angel Arms Rescue  is an organization that has a team of volunteers that include foster families, veterinarians and their staff, and people at local pet supply stores.  Their success is determined by money raised by adoption fees, direct donations, and of course fundraising events, which is how we became familiar with them.  As with any rescue group that gets in contact with us, I , Cindy Cherry do my due diligence in researching them.   I thought I had figured out most “angles” and  philosophies on rescue.  However, this group added to the ongoing debate on should we here in Canada keep importing off-shore dogs and adopt them out here. They do give you something to think about.

They are working what they call “ The Korean Project”.  Read their take on importing dogs from overseas.

“We are working closely with a group in South Korea who are trying to make a difference there for the dogs in mills and in the meat trade industry. South Korea has so many dogs, even dogs in Rescue do not get adopted.

We are bringing dogs to Ontario for adoption and are fundraising to help with the vetting and the flights. By doing so, not only will we be saving lives, we will stop the demand for dogs and slow the buying and breeding in Ontario.  We consider it a win win. The only way to Stop the Breeding, is to make it not a viable option to make money to the mill owners……by having more to adopt….we can start downfall and hopefully the end to the breeding and selling.”

So whatever side of the fence you land on, in  deciding should we here in Canada take in dogs from afar that could possibly take up homes from our discarded dogs, the line has been drawn.  It is here at Don Cherry’s Pet Rescue Foundation that we pass on the debatable facts and philosophies  and let an educated public decide for themselves how they are going to share their love for mistreated animals.