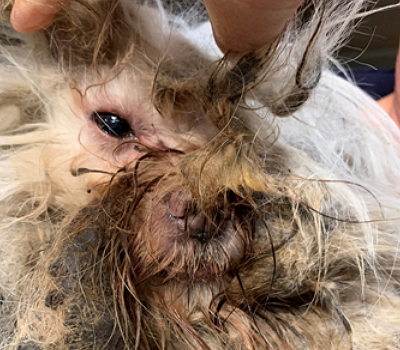 This close up gives you more of a view of how this dog lived. 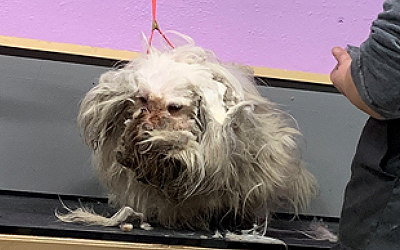 Just an FYI: I have groomed dogs in Mississauga, Ontario that were in just as bad shape. The smell equals the horror. 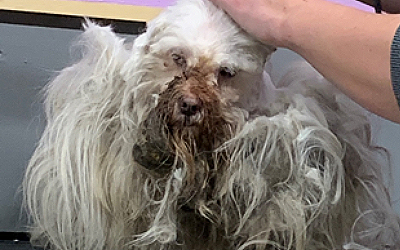 You have no idea how hot the blades get when cutting through matted hair like this.  The trick is you have to be constantly changing blades, or you “clipper burn” the dog. (yes, for all the groomers reading this, I do know about “Kool Lube”, but it only works so much, and you still have to change the blades).

Pictured here is Shadow. I have never met him, but sometimes things move you into action. Such was my adventure to Thunder Bay to assist at a Spay & Neuter Clinic on the Lake Helen 1st Nations Reserve. It was there that I heard about Shadow. To read more about my experience that enlightened me about the plight of the Northern Dogs and the challenges the people up North face in dealing with this crisis, click here.

The leader of this “expedition” was Lori. She told me about 2 years ago she came upon Shadow in the same awful condition as you see him now. She explained to his owners this was unacceptable and proceeded to clean him up, bring his vaccinations up to date, and of course neuter him. A year later he was in the same condition. I of course get on my high horse and went on a rant saying things that I cannot repeat here. She then calmly explained to me the situation and gave me things to think about. His owners also had a typical Northern Dog, which is a Husky cross and such. It was kept outside and as they would like to think was “low maintenance”.

Now Shadow, is another story. If you have ever had a longhaired lap dog, you know how much care that coat takes. With no access to grooming tools or even the knowledge of how to brush a dog what do you expect? Plus dog-grooming salons to say the least are not a common sight on a First Nations Reserve, even if you could afford the cost.

She explained to me, they loved Shadow and he slept on their bed at night. But I still couldn’t understand it. Then I thought of my first two dogs as a kid. First we had Ginger. A non-neutered miniature poodle. Did we brush him? No. My Mom took him to a salon and he was shaved down once a year. Same thing with our second dog, Casper, a Maltese. So how were we any different? Only difference is that we could pay and take it to a salon. If not, wouldn’t Ginger and Casper be in the same predicament?

It really bothered me the whole time I was up North about Shadow. I told Lori if she could get them to surrender Shadow, Don Cherry’s Pet Rescue Foundation would pay for the flight, grooming, and any expenses it took to get him out of Thunder Bay. I even did a video to them saying, “Don Cherry would love to see Shadow in Toronto, so what do you say about letting him come on down?” I don’t know if Lori ever showed them the video, but I did send them some Don Cherry sign stuff. Needless to say he made it down. Arrangements were made with a Rescue here in Toronto, to pick him up at the airport and before you knew it he was adopted.

Lori taught me a lot about how to look at the bigger picture in life. She knew I would do an article about Shadow, and made me promise not to knock his past owners. She made me realize that love comes in many ways. That “these people” (oops) really loved Shadow and to give him the opportunity for a better life in Toronto is the true sign of their love for him. I never thought of it like that.

All I saw was this poor creature encased in filth and hair and how could someone let a dog get in that condition. I guess when they say, “Ignorance is bliss”; it really rings true in this case. 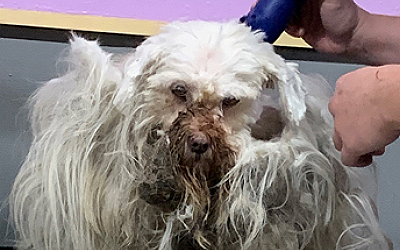 Caption: Shadow looks like he is taking it all in good stride.  It must have been such a relief. 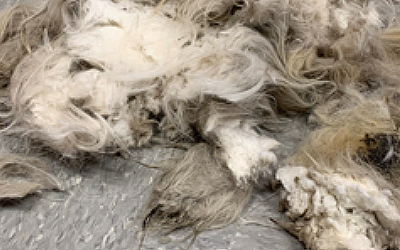 So you would call this: Hunks of hair? Imagine when this hair would get wet in the winter. 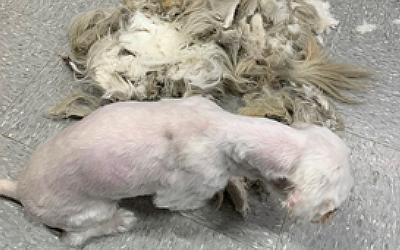 He is probably thinking: “This used to be me?”