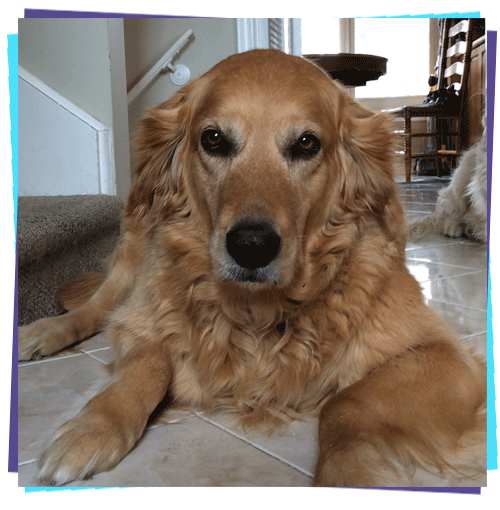 Cali was found wandering the 16th floor of a high rise apartment in Scarborough, Ontario, wearing an orange harness. She was called in as a stray but it is believed that her owner was the one who called in so they wouldn’t have to pay a surrender fee. Cali was an unspayed female who had absolutely no training at the age of one. It is thought that her owners believed they could make money off breeding her, as Golden Retriever are a very popular dog these days.

When certain breeds get popular this is a common occurrence, so much so there is even a name for it called ” The Dalmatian Effect”. This is a play on words on the phenomena describing how popular Dalmatians became when Disney’s movie 101 Dalmatians hit the theaters. This effect never has a good outcome. Indiscriminating breeding takes place by backyard breeders and puppy mill owners thinking this is a get rich quick scheme, which it usually is. The dogs suffer, plus a lot of gullible people are taken advantage of.

Cali ended up in a shelter, but was soon adopted by a very important volunteer to Don Cherry’s Pet Rescue Foundation, Carla Costa. She also owns another Simply Pets’ packaging cover dog called Daisy. It is this type of poor quality breeding practices that makes dogs susceptible to require expensive surgeries. Since Carla has owned Cali she has spent close to $6000 repairing both of cruciates, with 4-6 weeks of rehab per leg. It is this type of commitment one has to prepare yourself for if your dedicated to helping these dogs, that through no fault of their own, are poor quality and suffer with many health problems.