The Cherry Story on Pet Ownership

The President of this Foundation, gives her view on parents’ obligations in raising kids with a respect for animals. 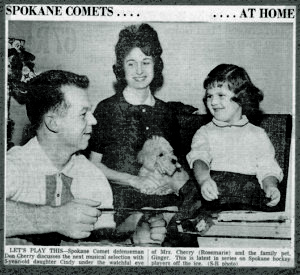 5 yr. old Cindy, with her Mom & Dad, plus her 1st puppy, a Poodle named Ginger in Spokane, Washington when her Dad played for the Spokane Comets. After a long road trip, my dad told me he had something in his suitcase for me, and I opened it up, and there was a puppy! Every little girl’s wish. Moments to live for. Please note that round disc is a 78 vinyl record of Disney’s Bambi, that I still own today, ( but not the record player)

Many people are very familiar with Don Cherry especially in the hockey world. Mr. Cherry is known as an ice hockey commentator for CBC Television and co-host of “Coach’s Corner.” He also has had a very successful career as a hockey player and NHL coach. You can always expect his candid commentary and very unique suits that he wears. However, there is much more to this extraordinary person and that is his love and passion for animals.

With this passion, it is no surprise that he and his daughter, Cindy, started the Don Cherry’s Pet Rescue Foundation with the mission to provide financial assistance to pet rescue organizations and educate the public on animal welfare across Canada.

I have a special place in my heart for animals too especially with the love we had for our beloved Lily who we lost this past January so I wanted to get to know this foundation a little more and offer some insight to parents on pet ownership. I had the honor and pleasure of connecting with Cindy Cherry, President of Don Cherry’s Pet Rescue Foundation and daughter of Don Cherry.

Pet ownership has taught Cindy many skills that has helped her become the accomplished woman and mom she is today. The lessons learned has empowered her to pay it forward by creating the Don Cherry Pet Rescue Foundation to help others give a second chance to these beloved animals who have not been able to find a caring and forever home. That is a life skill that not many have acquired so my hat goes off to the Cherry family for instilling the importance of pet ownership.

Cindy provided me with a special, honest and beautiful look at her upbringing and the impact of pet ownership in her life.

It has been an honor for me to share this personal story with all of you and I want to give a special thank you to Cindy for her time in giving us the father side of Mr. Cherry who I must say did an amazing job at raising one amazing person!

Make sure to follow Don Cherry Pet Rescue Foundation on Facebook, and Twitter to see all the amazing work that they are doing for our animals in our communities.

Until next time…Happy Parenting! Enjoy!

“As you may know, my father and I decided to start up Don Cherry’s Pet Rescue Foundation last year. There were many reasons why, but I’ll describe one major point for the interest of this article. That being, how, when a child owns a pet, it could shape the way they handle future responsibilities. That is one of the mandates of the Foundation which is to educate the public on social responsibility towards pet ownership. I will tell you firsthand how it has affected my life.

I look back now on how I was raised in regards to looking after my pets and how my father used it as a tool for preparing me for the real world. I believe responsible pet ownership is a good indication on how you were raised.

In all honesty, it was my father who was the driving force in me having the desire for pets. Since my mother saw how he led me down the garden path of getting rabbits, guinea pigs, mice, budgie birds, fish, and of course dogs, she left it in his capable hands of enforcing the rules of taking care of them. Not only that, but also having the difficult task of having conversations about their death. This brought out a logical attitude in dealing in life and facing reality. It is these tough conversations that I believe many parents today don’t like having and thus raise children in this perfect world that they want their children to believe exists.

I believe, it is a duty of a parent to get their child prepared for the outside world and not be their problem solver. Though their intentions may be viewed as a form of love, you are not doing them any favors. My father was forever checking out my rabbits’ water bowl and if it was empty, look out. You think you see Don Cherry’s wrath on TV, well folks, think of a kid getting a lecture brought down on you about not taking care of a pet. It all came down to tough love. I must admit looking back now over the water and food issue, it was not about the suffering animal (all of one day without water, cause it knocked over its water bowl) but facing my dad’s anger and his disappointment in me.

This is where parents can extrapolate (my favorite word of all time) on backing up what they say. This kind of follow through can be applied to many things that kids get themselves into. The point being, a pet is a commitment. How you handle that commitment at a young age is determined by your parents. When you are taught what a commitment is and what comes with it, you learn to weigh your options a lot better.

When they become adults, they can extrapolate weighing options about their career, marriage, mortgage payments, I could go on and on. The point is this, make your kids realize how much of a “commitment” a pet is. So they want a cute bunny at Easter? My dad’s favorite saying to me, when he thought I wasn’t playing with my rabbits enough was, “oh…I get it, the novelty has worn off.” When he said those words, I realized the next thing I wanted, whether it be a new bike, stereo, whatever, he would be waiting in the wings to bring up my shortcomings of not taking care of what I already had. I knew the games he played, and I believed I learned from the best. I think I use these skills to this day, and yes, this “game playing” is a skill.

Life is a game. People that say they don’t like playing games, usually don’t have the skills to play. I know some people won’t like that statement. That’s fine, but don’t forget to teach your kids that there are a lot of people out there that are looking for angles, so teach them some life’s skills.

Don’t forget you can start by not buying them a pet, but, adopting one that needs a home. Think of it as one of the many opportunities you will have to teach them about the world and its games, or better put…the challenges they will be facing.”